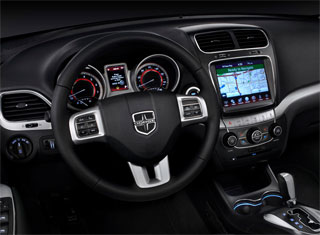 Garmin International Inc., a unit of Garmin Ltd. (NASDAQ: GRMN), the global leader in satellite navigation,  will show its in-dash navigation platform that is an available option for an array of 2011 model year Chrysler, Dodge, and Jeep vehicles.  Dubbed the Uconnect Touch, the system will be available for demo in the Garmin booth (South Hall #35831) at the 2011 Consumer Electronics Show.

The Uconnect Touch extends the collaboration between Garmin and Chrysler, which first launched on the 2011 Jeep Grand Cherokee.  The Uconnect navigation system was developed in conjunction with Panasonic, which leveraged its expertise and knowledge in the automotive OEM market to produce a full-featured in-dash infotainment center.

“This announcement indicates that Garmin is making great strides in becoming the in-dash navigation choice for one of the world’s top auto manufacturers,” said Cliff Pemble, Garmin’s president and chief operating officer.  “As the global leader in navigation, Garmin is able to rapidly bring cutting-edge features and functions into an integrated dashboard in a cost-effective manner.”

The collaborative effort puts Garmin’s nüvi-like consumer experience into an original equipment, in-dash radio.  The navigator includes highly detailed maps of the United States, Canada, and Mexico with more than six million points of interest, as well as many cutting-edge features found in Garmin’s newest portable devices, including:

• Simplified User Interface – unlike many competing in-dash systems, Garmin’s touchscreen menus are easy and intuitive to use.
• Lane Assist - guides you to the correct lane for an approaching turn or exit, making unfamiliar intersections and exits easy to navigate.
• Junction View - realistically displays 3D road signs and junctions on your route along with arrows that indicate the proper lane for navigation.
• Speed Limit & Current Speed – know at a glance whether you’re within the posted speed limit.
• Where Am I? - get your exact latitude and longitude coordinates, the nearest address and intersection, and the closest hospitals, police stations and fuel stations.
• Speaks Street Names – through the vehicle’s audio system, so you never have to take your eyes off the road.
• Trip Computer & Mileage Log – keep tabs on mileage, whether in fleet vehicles or while on vacation.
• Customized Vehicle Icons – your location is represented by an icon that looks like the Chrysler, Dodge, or Jeep model that you’re driving.

About Garmin
Garmin International Inc. is a subsidiary of Garmin Ltd. (Nasdaq: GRMN), the global leader in satellite navigation. Since 1989, this group of companies has designed, manufactured, marketed and sold navigation, communication and information devices and applications – most of which are enabled by GPS technology. Garmin’s products serve automotive, mobile, wireless, outdoor recreation, marine, aviation, and OEM applications. Garmin Ltd. is incorporated in Switzerland, and its principal subsidiaries are located in the United States, Taiwan and the United Kingdom.