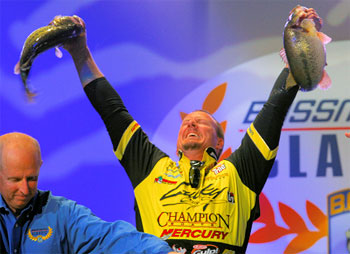 Lowrance, a world-leading brand in marine electronics since 1957 and GPS navigational systems since 1992, continues to be the top professional anglers’ choice for fishfinding and navigation performance — as proven at the 39th Bassmaster Classic, hosted in Shreveport, Louisiana, February 20 – 22, 2009.

Of the 25 contenders who made the cut for Sunday’s final competition day, 17 used Lowrance exclusively -- including 2009 Classic champion Skeet Reese and the other top five pros. During the Bassmaster Classic, all contenders are allowed to fish from their own boats, equipped with the electronics of their choosing.

The 2009 Classic winner Skeet Reese attributed much of his success to his Lowrance equipment onboard. “It was awesome for this kind of fishery. I could easily find the breaks and position on the right stumps,” said Reese. “Without Lowrance, I would’ve been unable to see the key points and would’ve been fishing blind.”

“Even the Lowrance GPS maximized my efforts,” Reese said. “It guided me along a creek trail through stumps, and left a plot I could easily repeat. I had a safe trail to follow again and again, and that gave me a five-minute fishing time advantage each way.”

With his win, Reese joins a distinguished group of past Classic winners who depend on Lowrance. In fact, 8 of the last 10 Bassmaster Classic champions have equipped their personal boats with Lowrance.

“We congratulate Skeet on his well-deserved win, and we’re fortunate for all the years he’s been a part of the Lowrance Pro Team ,” said Gordon Sprouse, director of marketing for all Navico Americas brands. “With the new Lowrance High Definition System (HDS) displays now shipping, and a side-viewing add-on HDS option coming later in 2009, Skeet and others will be enjoying an even greater technology advantage in future bass tournaments.”